Can Apple play a Role in EHR development?

Apple is one of the most valuable companies in the world and the current leader in consumer electronics. The latest initiative by Apple is called HealthKit – a platform which aims to integrate health data from various fitness gadgets and monitors in one place for users and doctors to access. HealthKit represents Apple’s foray into the lucrative field of health informatics.

HealthKit is both a platform and an app which will likely be included with iOS 8. According to Apple, doctors will be able to monitor data on patients from multiple apps such as blood sugar/pressure trackers and provide quality care. The company is working with several healthcare organizations so that health data from mobile devices can be incorporated into EHR systems.

As a tech company which controls both the software and hardware, Apple is in a unique position to coordinate efforts between software developers and the healthcare industry. With all relevant patient data available in one place, organizations do not have to worry about compatibility with multiple devices. Developers on the other hand need not concern themselves with the intricacies of individual EHRs systems while designing software. HealthKit also has the potential to improve patient compliance when it comes to reporting symptoms and to encourage users to take a greater interest in health-related decisions.

However there are tremendous obstacles to be overcome before Apple can successfully make inroads into the highly complex healthcare system. The foremost concern is the security and privacy of sensitive health data. The proliferation of EHR systems has attracted the attention of hackers and there have been several instances of identity theft through stolen or lost devices. The probability of health data being stolen increases manifold when such information is distributed over millions of devices.

Providers and hospitals have to comply with HIPAA standards when it comes to storage and transmission of clinical data. Typically user data is stored on Apple’s servers and if health information is to be included, those servers will also need to be HIPAA compliant. Another aspect to keep in mind is the fact that the medical establishment is only now beginning to move towards interoperability and data portability. Entrusting patient data to Apple – notorious for its tight control on user data – may not be the best move for doctors or patients.

Unlike technology companies with no experience in healthcare, Dovetail dental software was created in collaboration with practicing dentists. It was designed for the mobile tablet, especially the iPad, and is HIPAA compliant. Dovetail isn’t a general-purpose EHR but tailored towards the specific requirements and workflows of dental professionals. 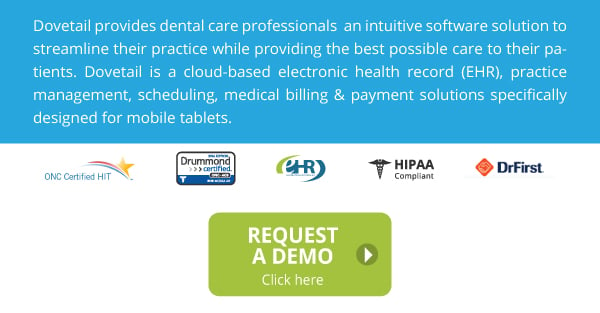 The Dental EDR Scene is Set to Explode